There’s little question the tide of marijuana legalization means that there are some stocks in the sector that will eventually succeed quite well. The trick is to find the right ones and be patient — without losing your shirt in the meantime.

Trulieve Cannabis (OTC:TCNNF), Columbia Care (OTC:CCHWF), and AFC Gamma (NASDAQ:AFCG) all fit the bill for good long-term holds in the cannabis sector, regardless of what their share price is this week. 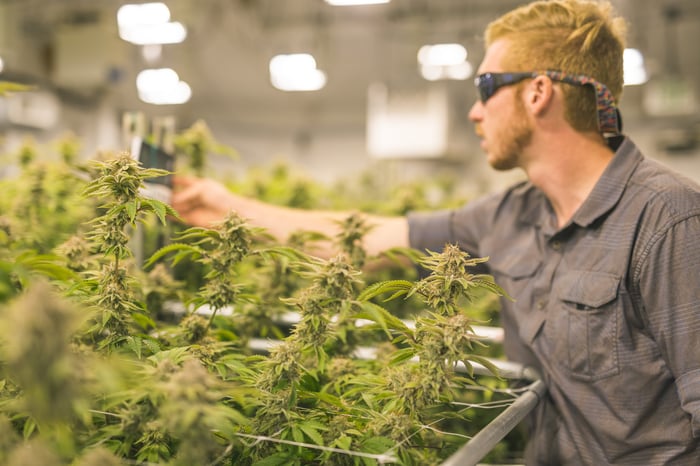 The case for Trulieve Cannabis

Trulieve’s shares are down more than 26% so far this year and more than 62% over the past year. That simply means a good stock is on sale, because Trulieve, unlike many cannabis companies, makes a profit quite consistently.

What is exciting about Trulieve is its continued growth in revenue and adjusted earnings before interest, taxes, depreciation, and amortization (EBITDA). When you look at it on a quarterly basis, both resemble a classic staircase pattern. Yet, because of its share drop over the past year, the stock has a reasonable price-to-earnings ratio of 27.17.

In the third quarter, Trulieve boosted revenue by 64% year over year to $224.1 million and adjusted EBITDA of $98 million, compared to $65.7 million in the same period in 2020. The company’s $2.1 billion purchase of Harvest Health and Recreation, completed on Oct. 1, should make Trulieve the largest and most profitable pure-play U.S. cannabis company. Once it begins to fully bring its Harvest Health holdings into the fold, it should be able to improve margins and see greater economies of scale.

The case for Columbia Care

Columbia Care is a smaller cannabis company than Trulieve, but it has shown tremendous growth, though its shares are down more than 58% over the past year and more than 5% so far this year.

It also reported adjusted EBITDA of $31 million, a rise of 634% over the same quarter in 2020 and an increase of 89% sequentially.

It operates 79 dispensaries and has 20 more in development, with a focus on Northeastern states that expect to see strong growth in sales thanks to various legislative changes. Adult-use sales are expected this year in New Jersey, next year in New York, and by 2024 in Virginia. Columbia Care said it experienced top-line revenue growth of 300% to 400% in states that went from medical-only sales to medical and adult-use sales.

The case for AFC Gamma

AFC Gamma’s shares are down more than 20% over the past year, and more than 19% so far this year. It is a real estate finance company that loans money to cannabis companies. Because of federal banking rules that make it complicated for marijuana companies to get funding from U.S. banks, AFC Gamma hits a nice niche market, following the successful trend set by Innovative Industrial Properties, a real estate investment trust (REIT) that does leasebacks to cannabis companies.

AFC Gamma doesn’t do leasebacks but is taxed as a REIT and has a generous dividend. Its shares are down more than 19% over the past year and more than 18% so far this year. That has more to do with the decline in share values of the companies it lends to than the company’s own financials. Through nine months, AFC Gamma reported $24 million in interest income and $13.9 million in net income. In the third quarter alone, it said it had $10.6 million in interest income, up 21.4% compared to the prior quarter, and showed net income of $7.9 million, up 71.4% sequentially. The company just had its initial public offering last March, so there isn’t a year-over-year comparison to be made. 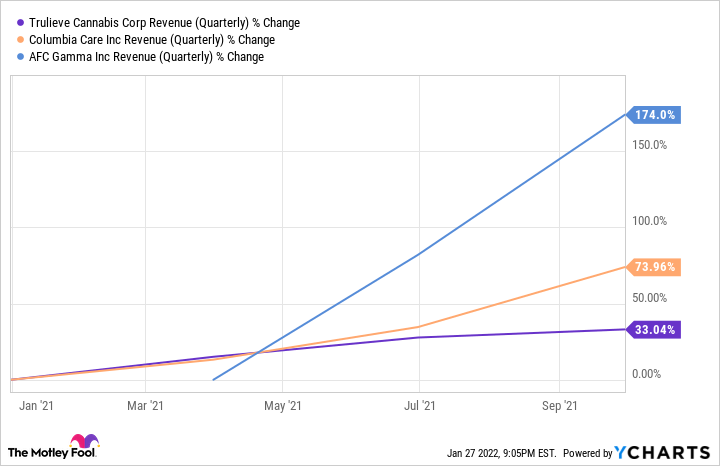 Looking for a good deal

I consider all of these marijuana stocks a bargain considering their potential.

Trulieve is the safest pick of the three because it has already turned the corner of profitability and is set up for more long-term growth. However, Trulieve’s financial success has made it more expensive than the other two with a price-to-book value of 2.994, compared to 1.521 for Columbia Care and 1.095 for AFC Gamma.

I think Columbia Care, despite being a riskier stock, is a better long-term bet based on its recent growth and how it is positioned for increased revenue. AFC Gamma is probably the best middle-range choice of the three. It has seen tremendous growth, though its track record is admittedly short. Its generous dividend makes the wait for the stock price to rise a little easier to take. However, if federal laws open up, such as the proposed SAFE Banking Act, that could bring a lot more competition into AFC Gamma’s niche, despite its first-mover advantage.