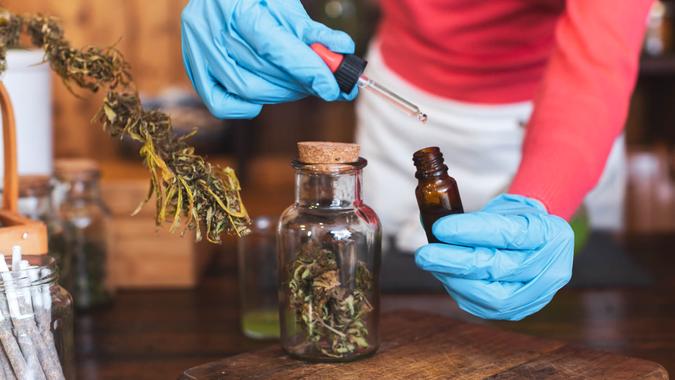 This week’s news that certain cannabis compounds can prevent the virus that causes COVID-19 from entering healthy human cells caught the attention of the medical and scientific communities — but doesn’t seem to have had much of a broader economic effect on marijuana stocks just yet.

The two compounds in question — cannabigerolic acid (CBGA) and cannabidiolic acid (CBDA) — are commonly found in hemp, Bloomberg reported. They were identified during a chemical screening as having the potential to fight COVID-19 by binding to proteins found in the virus and blocking a key step in the bug’s path to infect people.

Results of the study — conducted by Oregon State University researchers in collaboration with scientists at the Oregon Health & Science University — were published Jan. 10 in the Journal of Natural Products.

Researchers tested the compounds’ effect against alpha and beta variants of the coronavirus in a lab. None of the supplements were given to people, and the study didn’t involve comparing infection rates in those who use the compounds versus those who don’t.

“These compounds can be taken orally and have a long history of safe use in humans,” Richard van Breemen, a researcher with Oregon State’s Global Hemp Innovation Center, said in a statement. “They have the potential to prevent as well as treat infection by SARS-CoV-2.”

How Did This Cannabis-COVID Study Influence Stocks?

But if you are looking to cash in on the news by investing in cannabis stocks, you’ll probably have to wait until more data emerges about how the study translates into containing COVID-19. Leading stocks in the cannabis sector such as Jazz Pharmaceuticals (JAZZ), Grow Generation (GRWG) and Innovative Industrial Properties (IIPR) have all trended lower this week despite the study results.

The overall cannabis sector has been sluggish over the past year despite early hopes that a Democratic president and Congress might pave the way for progress on federal legalization of marijuana. Recreational marijuana is legal at the state level in many parts of the country, but not at the federal level.

After peaking in February, many marijuana stocks have been in a steady decline since then, U.S. News & World Report recently reported. Because of federal prohibition, cannabis companies face higher taxes and compliance costs. Legalization would likely lead to more free cash flow and higher valuations.

But there has been progress in certain states regarding cannabis use, along with positive news on the medical marijuana front — including the COVID-19 study. For now, many industry watchers are taking a wait-and-see approach.

“This year will be a telling sign on the industry, as many are looking for the sector to find a bottom,” Brett Sifling, director of the financial planning program at Gerber Kawasaki Wealth and Investment Management, told Benzinga this week.

Vance Cariaga is a London-based writer, editor and journalist who previously held staff positions at Investor’s Business Daily, The Charlotte Business Journal and The Charlotte Observer. His work also appeared in Charlotte Magazine, Street & Smith’s Sports Business Journal and Business North Carolina magazine. He holds a B.A. in English from Appalachian State University and studied journalism at the University of South Carolina. His reporting earned awards from the North Carolina Press Association, the Green Eyeshade Awards and AlterNet. In addition to journalism, he has worked in banking, accounting and restaurant management. A native of North Carolina who also writes fiction, Vance’s short story, “Saint Christopher,” placed second in the 2019 Writer’s Digest Short Short Story Competition. Two of his short stories appear in With One Eye on the Cows, an anthology published by Ad Hoc Fiction in 2019. His debut novel, Voodoo Hideaway, was published in 2021 by Atmosphere Press.