With cannabis stocks crashing, Leafly isn’t picking the best time to come public via a business combination with Merida Merger Corp. I (MCMJ). The company operates a non-plant touching platform allowing for the U.S. operation to list on a major stock exchange, unlike other cannabis stocks. My investment thesis is Neutral on the stock until the SPAC process is over.

Along with WM Technology (MAPS), owner of Weedmaps, Leafly is where consumers discover cannabis. The company offers a subscription-based platform where 4,600 paying retail subscribers are offered marketplace and advertising services to connect with cannabis customers. Leafly offers a three-sided marketplace powered by data, a research library and user reviews to produce a strong marketplace for brands and users to connect.

Anyone looking at the WM Technology chart after completing the de-SPAC process last year will realize the deal isn’t a home run for shareholders. The legalization process has been volatile and Weedmaps has run into multiple legal issues with subscribers lacking legal licenses to sell cannabis considering the illicit market in areas such as California remains strong.

Leafy suggests the company as a compliance department regarding retailers to have valid licenses. The Seeking Alpha interview with CEO Yoko Miyashita does a great job of discussing this dynamic and the issues with capital constraining growth last year.

Leafly has over 10 million MAUs with average order volumes of $102. As the cannabis market continues to expand with state and federal legalization, the company will see the marketplace grow. Not to mention, Leafly plans to double the sales team to drive growth in 2022. 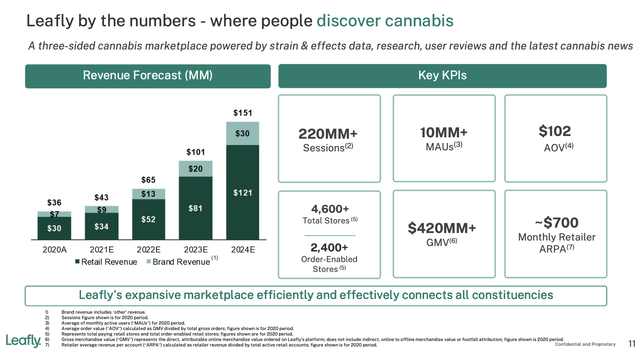 When the SPAC deal was announced, the company forecasts 2021 revenue of just $43 million with the amount surging to $65 million in 2022. The market would be impressed with a 52% growth rate this year, but again Weedmaps has constantly had to cut unlicensed customers from the platform and reset financial targets souring the investment excitement in the space.

Leafly has a massive marketplace already with 7,800 brands and 125 million visitors to the site suggesting the company only converts ~10% of visitors. The market is highly competitive with other platforms such as Dutchie and Jane trying to compete with the dominant players of Leafly and Weedmaps. 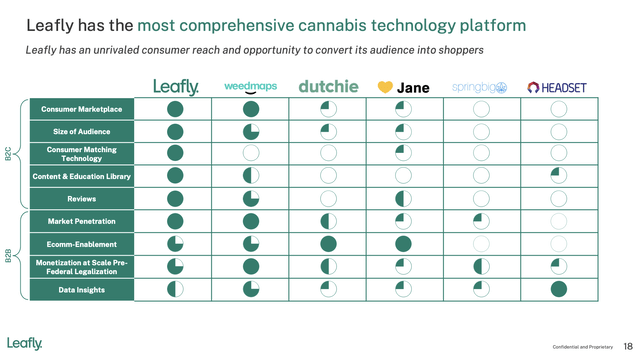 The funds raised from these SPAC deals and the publicity of going public will probably set these 2 leaders with audiences the other players can’t match. The big difference between Leafly and Weedsmaps is one focuses on professional content and consumer reviews to educate purchase decisions while the latter is focused on building SaaS software to package with the marketplace options.

While all of the data points on the business are promising with the unquestioned long-term growth potential in cannabis, the de-SPAC process hasn’t been kind to most stocks. WM Tech. is now trading down to $5 and a lot of SPACs trading right around $10 collapse following a deal with tons of share redemptions.

The business combination has proposed raising $161.5 million via the SPAC deal and a prior $31.5 million capital raise. The biggest question is whether the $130 million in the trust is redeemed or not.

The stock will have 54 million shares outstanding for an equity valuation of $540 million and a potential enterprise value of just $388 million. Naturally, the problem is whether the company can raise the funds at a $10 share price. 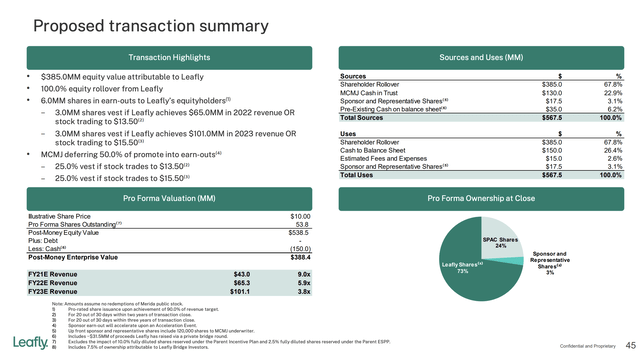 The biggest issue for the business is the proposed operating losses through 2023. The lack of cash raised at $10 via this SPAC deal could leave Leafly needing to raise more cash with a stock trading down substantially.

Based on the revenue projections, the stock already trades at just 6x ’22 EV/S targets. Any dip would make Leafly attractive, but any dip could leave the cannabis company raising cash in the future at crazy cheap valuations.

The key investor takeaway is that investors interested in Leafly need to wait for the deal to close and the stock to settle out based on share redemption levels. With competitor WM Tech. trading far below $10 and the general cannabis space under pressure, the prospects for Leafly rallying don’t appear promising anymore.