This article is excerpted from Tom Yeung’s Moonshot Investor newsletter. To make sure you don’t miss any of Tom’s potential 100x picks, subscribe to his mailing list here.

The Moonshot Investor’s top picks for 2022 so far have been the types of investments you would expect.

Now what if I told you that my No. 1 pick for 2022 was all those things wrapped into one company?

You’d probably think I was joking.

But much like the fat sandwich shops in New Jersey (which add french fries and onion rings inside their subs), Mr. Market occasionally gives us a pick so loaded that it’s hard to look away.

And once you read about my No. 1 pick for 2022, you’ll understand why I’ve saved the best for last.

The Offbeat Pick of the Year

Investors could blame it on the conservative nature of stock pickers. J.P. Morgan’s tome of 50 “most compelling” stocks to buy for 2021 included such unexpected picks as Disney (NYSE:DIS) and Coca-Cola (NYSE:KO). Shockingly risky, I know. As the old saying goes, no one ever got fired for buying IBM (NYSE:IBM) — even if their basket of 50 picks underperformed the market by 600 basis points.

But that’s precisely why outfits like InvestorPlace perform so well. We’re the ones looking at inefficient markets — penny stocks, cryptocurrencies and hypergrowth investments — where investors have a far higher chance of generating alpha. This past year, InvestorPlace.com was the No. 1 performing stock-picking website, according to an independent study by TipRanks.

My top pick for 2022 continues this motif — an offbeat stock that Wall Street has overlooked because of its small market capitalization and under-the-radar management.

So, what is this magical company that puts onion rings (or maple syrup) in a sandwich?

This Canadian-based blockchain payments company fits in perfectly here at The Moonshot Investor. Not only does the firm serve the hypergrowth industry of marijuana dispensaries. It’s also well-run and a small penny stock available to buy for just about $1.

When you’re looking to gain 2x… 5x… 10x… on your investment, remember that it’s far easier for a $200 million firm to become a $2 billion one than it is for a $2 billion company to grow another 10x.

Founded by former Microsoft (NASDAQ:MSFT) general manager Ryan Hamlin and Adapx’s Jon Baugher, POSaBIT is a tiny stock with grand ambitions. And it all starts from finding a lucrative business that Wall Street has largely ignored.

And there’s a reason why the big firms don’t want to get involved.

Exchange rules prohibit U.S.-listed firms from dealing in Schedule I controlled substances. That means credit card giants Visa (NYSE:V) and Mastercard (NYSE:MA), as well as lesser-known payments processors like $64-billion-dollar Fiserv (NASDAQ:FISV) are locked out of the market.

Meanwhile, patchy Federal regulations have left a loophole for Canadian-listed firms to roam free. Though interstate commerce is still illegal, these offbeat firms are largely free to operate within states that have legal marijuana.

That created an unintended bonanza for Canadian-listed firms, including POSaBIT. Curaleaf Holdings (OTCMKTS:CURLF), a Toronto-listed cannabis firm based in Massachusetts, has seen its revenues rise 80% this year even as U.S.-listed names like Sundial (NASDAQ:SNDL) have struggled.

A Little Bit of POSaBIT

Now here’s where POSaBIT comes in.

These workarounds might seem absurd to traditional POS vendors. Payment terminal operators typically serve as a neutral financial bridge between a seller’s bank and a buyer’s one.

But in the quasi-legal world of cannabis retail, nothing is so simple. Cannabis dispensaries can’t open accounts at banks that operate across state lines nor accept credit cards. Only local credit unions and companies like POSaBIT offer workarounds to these arbitrary rules.

That’s given POSaBIT plenty of room to grow. Processed payment volumes grew 232% to $87.3 million in Q2, while gross profits ballooned 350%. When you have a one-of-a-kind solution in an uncompetitive market, it’s hard not to make money.

State-level rules have also transformed cannabis into a massive growth industry. Since the 2020 election cycle, eight states have legalized adult-use marijuana. Cannabis-tracking site Leafly estimates another seven states will legalize in 2022, including Pennsylvania and Maryland (Florida could soon follow suit). In part, that’s because many younger Republican lawmakers are joining Democrats in calls to legalize the drug.

“We need the federal government just to get out of the way,” said Rep. Nancy Mace (R-S.C.), who recently introduced the first Republican legalization bill in Congress.

That’s put POSaBIT into hypergrowth territory. The company now expects to operate in up to 22 states and generate between $17.5 million to $19 million this year — a 136% growth rate. 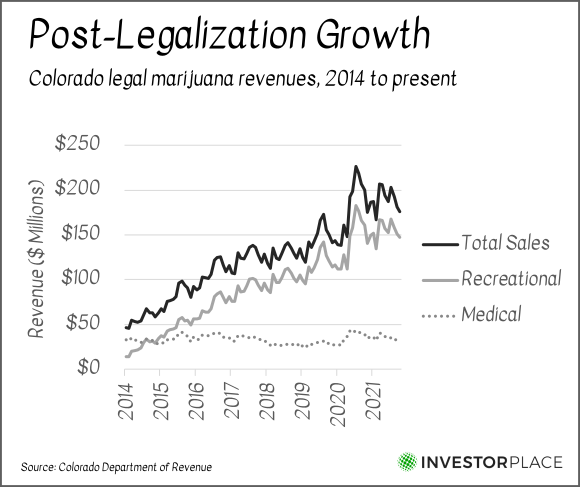 Too Much of a Good Thing?

Ask anyone who’s ever smoked marijuana, and they’ll tell you it’s extremely hard to overdose, especially when compared to alcohol or hard drugs.

But that doesn’t mean zero risk.

The same principle applies to POSaBIT.

First, the company is still a startup. Its net revenues clock in at just $5 million per quarter and the firm has had to pivot its business multiple times. POSaBIT’s early attempts at crypto payment systems proved to be a failure, and there’s no guarantee that its forays into credit card payments or microlending will yield results.

Second, there’s competition. Companies from Square (NYSE:SQ) to Crypto.com (CCC:CRO-USD) are quickly developing versions of blockchain-based payments that could skirt current cannabis regulations. POSaBIT won’t have the marijuana PoS market to itself forever.

Finally, federal laws can turn on a dime. Though a gridlocked Senate won’t likely pass federal legalization laws in 2022, a sudden shift among GOP leadership could quickly change that calculus. POSaBIT needs to grow large enough before that happens to make it a takeover (rather than a take-out) candidate.

What to Do with POSaBIT

Readers of the Moonshot Investor will know that risky stocks are… well… risky. You don’t put all your eggs in one basket, especially when the basket is attached to a rocket ship without airbags or a parachute… and asking you to eat a sandwich with mozzarella sticks wrapped in it.

But occasionally, the market throws us a fat pitch. And when it does — much like its gift of POSaBIT — investors should be quick to recognize it as a top stock for 2022.

P.S. Do you want to hear more about cryptocurrencies? Penny stocks? Options? Leave me a note at [email protected] or connect with me on LinkedIn and let me know what you’d like to see.

Thomas Yeung is an expert when it comes to finding fast-paced growth opportunities on Reddit. He recommended Dogecoin before it skyrocketed over 8,000%, Ripple before it flew up more than 480% and Cardano before it soared 460%. Now, in a new report, he’s naming 17 of his favorite Reddit penny stocks. Claim your FREE COPY here!

On the date of publication, Tom Yeung did not have (either directly or indirectly) any positions in the securities mentioned in this article.

Tom Yeung, CFA, is a registered investment advisor on a mission to bring simplicity to the world of investing.